Smoke N Carly Boon has made me a firm believer that there is no such thing as coincidences!

I started riding lessons around the age of ten. I chose hunt-seat because it looked so much more exciting than Western since you could gallop around the ring or in a field and jump obstacles. My parents bought me horses throughout my life for hunters, combined training, and then I later started loving dressage. later my love became Dressage.

In the mid 90s, I had moved to California and become friends with my now husband and his family. They invited me to go to a rodeo one night in ’97 or ‘98 in a nearby town. I wasn’t a big rodeo event person but enjoyed anything animal, and of course, horse, related, so I tagged along with them. The only thing I remembered about that evening was the rodeo announcer, actually, more precisely, the rodeo announcer’s horse. I was enthralled with her and asked my friends if they knew the announcer and if they thought he might want to sell that horse. They told me he was a big cow-horse breeder and trainer in California and that was his personal horse that he rode everywhere. They doubted she would be for sale. I could not tell you anything about that rodeo, but I could not forget that horse.

My husband, Rob, and I moved back to Texas in 1999 before my oldest daughter, Brooke, was born that November. My youngest daughter, Kayla, was born in 2004. Both grew up with my old dressage horse, Fabelhaft, and both had a small pony of their own. I had hoped both of my daughters would find an interest in dressage as they got older, as it would be easy for me to help them with training and lessons. Kayla enjoyed going out on trails with me to ride but Brooke was more ambitious and wanted to do more riding and training in the arena.

After Fabelhaft passed away in 2009, it took me a few months to get past that. I thought it might be time to start keeping an eye out for a great all-around horse that Brooke could advance with in her Western riding, but that also had the right attitude and athletic ability to possibly do some dressage training, too.

Brooke and I had become addicted to going to a local horse and tack auction that used to run every Saturday night. It was cheap entertainment and a great way to hunt for new and used tack and horse related items as well as sell tack that we no longer used. We would occasionally find a horse to buy, fix up, and resell, and always loved watching the variety of horses that came through. You could occasionally get lucky and find a diamond in the mix, so we were always looking, just in case.

One auction night, in the summer of 2010, we spotted a cute little sorrel mare with bright eyes, resting in a back corner of her stall. Something about her caught my eye but I didn’t know what is was. I kept asking myself why I was so attracted to this little mare. There was nothing spectacular about her. She was a bit long in body, not magnificent, and not foundation-bred like most quarter horses and paints that we typically admired in Western events. I had to think it was that intelligent, bright sparkle in her eyes. We saw her run through the auction, but no one rode her and people were scared to bid on her. I could not quit thinking about her and knew she would most likely be back again the next week, since her seller didn’t get the price that had set.

The next week, we got to the auction early to look for the little sorrel mare with the bright twinkling eyes. She was there. Sleek, shiny, and quietly resting in the back of her stall, but alert and aware of everything going on around her. I could tell this was a super smart mare. She ran through auction again, no one bidding enough to match the seller’s price. Worried the mare may not come back again for a third attempt to sell her, I went to the office to find out who the seller was and if it would be possible to try her out. She belonged to the auctioneer and a partner of his.

I found the auctioneer and told him I was interested in the mare and wanted to put my tiny, 12-year-old daughter on her to try her out. He froze for a minute before answering, then told me we could ride her in a small holding pen, about the size of four small stalls. That was perfectly fine as I just wanted to see how the horse used herself a bit. Brooke got on the little sorrel mare after they saddled her. She could only do a tiny circle around me, but I gave her instructions on what to do and saw what I needed to see. I was excited to see how athletic this little mare was and how she could sit on her rear and use herself so well. And she had that all knowing, intelligent bright little sparkle in her eye. I had to get this little mare for my daughter! I asked the auctioneer if he could give me a few days to get my purchase money together and come back to get her. It was a deal!

A few days later, we met the auctioneer at the sale barn and gave him payment for the little sorrel mare, Smoke N Carly Boon. He gave me an envelope with her Coggins test and then told me she also had APHA registration papers. As we did not show or breed APHA or AQHA, I had never thought to ask about her having papers. Alan Drake, the auctioneer, proudly pulled them out and showed me that she had been bred by a top cow-horse breeder in California. Wait! … What? … Could it be? I called my husband and asked him what the name of the rodeo announcer was that rode that amazing sorrel mare that I fell in love with back in California so many years ago. I could not believe it! The rodeo announcer and breeder of this bright-eyed little sorrel mare that I had just bought was one and the same! Who would have ever guessed it? I suppose that amazing mare that he rode at the rodeo was very closely related to this mare, Carly, that we had just bought. Maybe her dam or grand-dam.

I knew there was something special about this little mare. We drove home with her, even more excited with this amazing new revelation. She taught Brooke so much, but we never did do dressage with her. Although Brooke only competed at playdays with Carly, she got us both interested and hooked on reining. She was linebred on Mr Gunsmoke, so we searched for others related to her, and started learning bloodlines of reining horses. We now own several fillies and broodmares and Brooke has a young horse that she competes on in reining. Smoke N Carly Boon was the catalyst of our reining adventure. She is 20 years old now, has had one filly for us that we are now breaking to ride. Who would have ever thought what this little mare would have taught us and led us to reining. I have to think we are exactly where we are supposed to be. I no longer believe in coincidences! 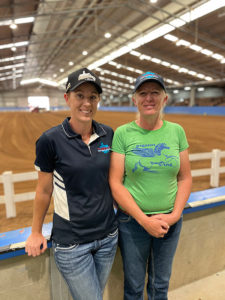 Behind the Slide – Tasmania