Emily Emerson and Give Me Starbucks won the 2019 NRHA Invitational Freestyle Reining.

Article and Photos by Kaycie Timm

Two spotlights lit the pitch-black arena as NRHA Professional Emily Emerson and Give Me Starbucks (Walla Walla Whiz x Starbucks Rosy Blend) stood in the center of the pen. Emerson’s simple duster and cowboy hat contrasted the blue glitter and shimmering streamers that adorned her mount. More notable than the pair’s costume, however, was something the crowd couldn’t see. Emerson had arrived in Oklahoma City just that morning, missing her chance to school “Mocha” in the Jim Norick Coliseum arena—and Mocha was bridleless.

“I took the bridle off of her not knowing how she was going to be out here, because this is the first time I’ve gotten to be super serious with her,” Emerson explained. “She was rock-solid. She locked right in and gave me the ride I was looking for.”

As Gary Allen’s “Every Storm Runs Out of Rain” began to play, Emerson and Mocha moved easily from a walk to a jog before stopping to perform an impressive set of spins. With each successful maneuver, the crowd cheered
louder, sensing the emotion of the run and the weight of Emerson’s chosen song.

“This song just hits a certain spot inside of you when you have a year that you’d hoped would be better,” Emerson revealed.

Growing up on a ranch in Montana, Emerson knows the power of a rainstorm—and during 13 years working for NRHA Professional Shane Brown, she’s seen her share of less-than-perfect show seasons, too.

“Emily wasn’t planning to come to the Futurity,” shared Mocha’s owner, Kelly Rainford. “She didn’t have any Futurity horses this year and needed to stay home to take care of everything there.”

But when Emerson received a call inviting her to compete in the Freestyle, Brown encouraged her to go. Rainford, who was planning to show her 9-year-old mare in the Adequan® NAAC and ancillary portion of the Futurity, offered Mocha as a partner for the ride.

“Emily has helped me a ton with Mocha,” Rainford continued. “She tried her out bridleless, and Mocha was just awesome. She rides just like she has a bridle, so I thought, ‘This might work.’”

Emerson’s song choice held special meaning for Rainford, too, who has owned her mare since 2016.

“We’ve all seen that darkness, and we’ve all had hard times,” she shared. “In a lot of ways, Mocha was my dawn after the dark. I was close to quitting when my mom found Mocha and encouraged me to try her. She’s the first mare I’ve really connected with, and I feel like we’re teammates when we show up to work. She’s very special.”

Emerson showcased Mocha’s talent throughout their run, flowing through the required maneuvers in perfect time with the moving song. Mocha stayed in sync with her rider, responding to each cue without missing a beat—despite the missing bridle.

“Turning her around can be a challenge, because every now and then she over-tries,” Emerson revealed. “But when you take that bridle off, she turns better every time.”

A beautifully timed final stop brought the crowd to life with cheers as Emerson and Mocha exited the arena and awaited their score. The resulting 223 held the lead through the remaining runs, clinching championship honors for the deserving pair.

“I’m very excited to come out at the top and start out hopefully having a good year next year,” Emerson said. “I’m very happy.”

As for Mocha’s future, Rainford has big goals to keep improving and return to the show pen for another season.

“I have some things to learn about riding her and getting her to do as good for me as she did for Emily,” Rainford shared. “I think she’ll make a really nice broodmare someday, so we’ve been shopping the boys, too.”

You might have everything perfect at home, then it all falls apart at the 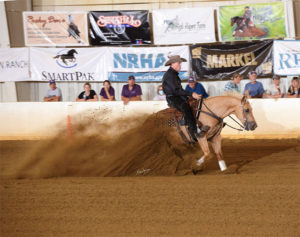 Behind the Slide – Tami Wilson, Colorado