Ask Francesca Sternberg about Colonel Chic Dream (Magnum Chic Dream x Princess Colonel), and she’ll tell you her 2013 gelding only has one fault: he’s too good.

“He’s a trouper of a horse,” Sternberg shared. “He always tries hard, he’s a gentleman, and he’s fun to ride. The trouble is, everybody in the family loves him, so I have to fight my way into the saddle.”

With her eye on a 2019 world title, Sternberg convinced her son, George, and daughter, Tabitha, to let her show “Chico.” Her efforts paid off, and the pair finished the year with the 2019 NRHA Prime Time Non Pro World Championship.

“[The world title] was on my radar, so I started looking at shows in Europe offering Prime Time Non Pro classes,” Sternberg explained. “I won the Prime Time class in Italy [at the Elementa Masters Premiere] in November, but it was right down to the wire whether we’d be able to get it done.”

Over the summer, the Sternberg family hit the road together, traveling from show to show in what Sternberg described as “a Clampett summer,” referring to the Beverly Hillbillies. Their tour of Europe not only helped Sternberg in her world title campaign, but also brought her family closer together—literally.

“There aren’t many 18- and 21-year-olds who want to climb into a motorhome the size of a matchbox with their parents,” Sternberg laughed. “For us, it’s really a family thing. The horses keep us happy and together, and that’s pretty amazing.”

With the family’s support, Sternberg and Chico kept giving their all in the show pen, hoping their fast-accumulating wins would be enough to clinch the title.

“I just kept plowing away at it and keeping my fingers crossed,” Sternberg said. “I really didn’t know until it was official. When I read it online, I thought ‘oh my goodness, I actually did it.’ I think everybody wants to be a world champion, if you’re a competitor. I’m just really thrilled.”

And rightfully so—Sternberg had an incredible season, racking up wins, making memories, and earning a special honor from the British Equestrian Federation (read more about that award at bit.ly/FSternbergAward).

“2019 was an exceptional year for me, for lots of reasons, with my horses and my family,” Sternberg continued. “[The world title] was the cherry on the cake. I need to thank my kids, George and Tabitha, for handing my horse back to me occasionally, and my husband, who’s very long-suffering with all this. I really couldn’t do it without them.”

This year, Tabitha will show the beloved gray gelding, while Sternberg focuses on several up-and-coming homebred horses. But Chico still has Sternberg’s heart.

In 2017, an exercise-testing protocol was defined for reining horses. How can that help 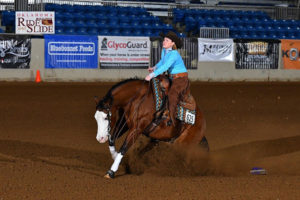 Behind the Slide – Kary Key

Save Yourself From the Trap of ‘Comparisonitis’