Why I Rein: Jennifer Greenleaf

Jennifer Greenleaf, Rio Verde, Arizona, has been participating in NRHA competition since 2015, and she rides with NRHA Four Million Dollar Rider Craig Schmersal.

How have horses played a part in your life?

I grew up around horses, but always rode English. My father played polo, my mother fox hunted, and I rode in Pony Club and showed jumpers as a junior rider. I’ve basically showed hunter/jumpers my whole life. I’ve also played polo and done fox hunting.

How did you get involved in reining?

One year, when I was in Wellington, Florida, I decided to take a lesson on a reining horse. I loved it and decided it was something I wanted to pursue. One of my friends told me about the McQuays and McCutcheons and that I needed to call Colleen McQuay. After talking with Colleen, I started riding at Tom McCutcheon Reining Horses in 2015.

I spent time flying back and forth between Texas and Virginia, which is where I lived at the time. Debbie Brown was my main trainer at the McCutcheons’, but when you ride there, you get the joy of being around the whole team of trainers and riders.

What was it about that first reining lesson that made you want to get more involved?

My first reining lesson was also my first time in a reining saddle, and it was so difficult for me.  I thought, “I’ve been riding my whole life, and I know how to ride, and I can’t even believe this is so hard!”

What intrigued me was that it was so different from what I’d done in my previous riding life, but that there were many similarities, as well. Great horses are great horses, and great riders are great riders—regardless of the discipline. When things started to come naturally to me in the reining, that was just a huge feeling of accomplishment that I’d never felt in my English riding experience because I’d been doing that my whole life.

Coming from your background, you must enjoy a challenge but also the adrenaline that comes with riding a reining horse.

Yes, I enjoy the competitive aspect too. When I  started reining, I lived in Virginia, which is hunt country. It’s really fun and really fast to fox hunt on a horse, but there’s no competitive aspect, and you don’t get that feeling of development like you do in reining.

Were there times when you referred to your jumping experiences as you learned reining maneuvers?

Yes. When I struggled with particular aspects of reining, Colleen was very helpful in trying to liken it to something in the jumpers. For example, I was having trouble with rundowns to the stop. One day, she said to me, “Ride it the same way as when you’re going down to a water jump.” That allowed me to correlate the feeling I already knew of sitting back, increasing speed, and getting the horse out in front of me. She explained that instead of a horse taking off and jumping, it’s about the horse jumping something wide and more forward. That really helped me.

Do you have a favorite reining memory?

Yes, when I’d just moved out of the Rookie and started showing in the derbies, I had a wonderful gelding that Tom McCutcheon used to show named Survivorman (Gunner x Shining Survivor).

I showed him at the 2017 National Reining Breeders Classic (NRBC), which was above my pay grade, so to speak! The NRBC is my favorite horse show, and we marked a 218 in the first go, and made the L4 finals in the non pro. That gave me a huge boost of confidence and made it really fun. I made the L4 non pro finals at the NRBC the next year as well.

What do you enjoy about the reining horse industry?

I’m going into my fourth year as a board member of the Reining Horse Foundation. Being involved with a group like RHF that actually makes an impact has been meaningful, and I’ve gotten to know a lot of people through that endeavor.

How was your transition from the jumping-bred horses to reining bred horses?

Prior to starting reining, I’d never had any experience with Quarter Horses, and I had no idea how phenomenal they are. To learn about them, what they’re capable of, their attitudes, and how well-trained reining horses are has been an incredible experience for me to have in my life. 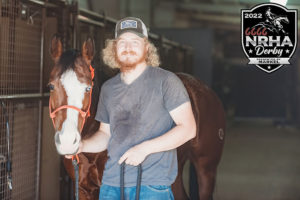 Behind The Slide – Grant Goetcheus

Reiners saw a new face and megawatt smile stepping out of the Coliseum Monday,

Why I Rein­: Nancy Brugato

Nancy Brugato of Tigard, Oregon, has been showing in NRHA events since 2010. She