Why I Rein­: Nancy Brugato

Nancy Brugato of Tigard, Oregon, has been showing in NRHA events since 2010. She and her brother own and operate a wholesale produce company, Pacific Coast Fruit Company.

How long have horses been a part of your life?

I’ve been riding horses my whole life. I have two older sisters, and my folks really supported them through 4-H and other horse interests. I’m quite a bit younger than they are, so when I came along, my parents were kind of tired of the whole horse-showing thing, which was ironic because I was the one who really liked horses! When I was young, my friend and I would ride bareback everywhere—on our horses, on the neighbor’s horses. Once our kids came along and my daughter got older, we started going to horse “playdays,” and I finally bought a saddle, which was a barrel racing saddle. Even though I’d ridden all my life, I didn’t own a saddle until I was 40. I actually still have that saddle. It’s black and has lightning bolts on it. I thought it was pretty cool at the time!

How did you get into reining?

I originally started out riding cow horses and cutters. The cow horse aspect really was pretty natural to me. The first really nice horse I had was a cow horse I bought from Robert Chown. I did the reined cow horse thing for a while. However, as I progressed and wanted to learn the mechanics of the various maneuvers, there were a lot more reining trainers than cow horse trainers in my area. In reality, I spent a lot of time just figuring things out on my own because I didn’t grow up doing 4-H or ride with trainers when I was younger. There are plusses and minuses to that process. Sometimes it took a lot longer, but when I accomplished something or won a class, it was really neat to look back on it and think, “Wow, I did that!”

Do you ride with a trainer now?

My mentor, who I just love to ride with, is Al Dunning. He’s the one who really taught me how to do the cow horse and the cutting. However, at one point he told me that if I wanted to take it to the next level, I needed to find a good trainer to ride with on a regular basis. I’d ridden with Billy Williams down in Texas before and been happy with the results, so I committed to riding with Billy for a year. During that time, I kept my horse in training and flew back and forth from Oregon to Texas. It was the best thing I ever did. I learned so much and had the time of my life. I haven’t gotten the opportunity to show much this year because my mother was sick and ultimately passed away. But I’m looking forward to next year.

What do you love about reining?

Even though reining is an individual sport, it has such a community aspect that it almost feels like a team sport. It’s pretty neat to go to a show and have people I don’t really know come up and tell me they noticed my skills are improving. I love that sense of camaraderie, but also the very competitive nature of the sport and the athleticism that reining requires. It might not look like it, but reining is actually very complex. You’re working an animal and trying to remember the pattern while riding through the maneuvers at a high degree of difficulty. There’s such great camaraderie because we all know how hard this sport is. It doesn’t matter who you are, all of us are one lead change away from losing or winning a class. It’s a really cool feeling when you put the work in and then go have a great run.

Do you have any especially meaningful reining memories?

Yes, quite a few! It’s hard to pick, but one of them is when I showed my little cow horse in a big class of 84 entries, and we ended up third. I think we marked a 72.5. Another is when I got to show at the National Reining Breeders Classic last year, which has always been a dream of mine. I made it to finals of the rookie shootout and got to show in the big coliseum. Being at a prestigious show like that and having the opportunity to just watch the top trainers school their horses was wonderful.

Do you have any special warm up routines before you show?

Yes, before I walk in to show, I always say a little prayer, asking all the famous reining trainers that have since passed on to watch over me during my run and keep me out of trouble.

PrevPreviousProving Your Junior Stallion’s Worth
NextFrom the Judge’s Chair: Evaluating the SpinNext

There’s nothing like the love of a horse to bring a family together. This 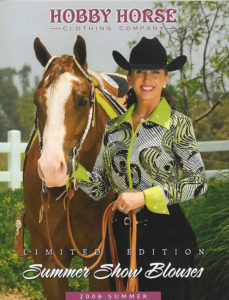 Behind the Slide – Jewels Farmer

There is no better time to try something new than now. Having already shown