“Reining here is tiny in comparison to the US and Europe. Our biggest hurdle is that we have a lack of trained reining horses,” said Greg Garland from South Africa. He’s one of the founders of the NRHA Affiliate in his country. His wife, Lizelle, is the other founder, along with a handful of reining enthusiasts. Finding older horses trained for reining in South Africa is almost impossible. This makes it difficult to get new riders into the sport.

“It’s really hard to come by a reining horse in our country that you can jump on and ride a pattern on,” Greg explained. “We are pushing ranch riding right now because those are the basic maneuvers of reining and hopefully that will grow and develop into reining.”

Always a western rider, Greg stumbled upon the sport when he wanted to step up his game from trail riding.

“I arranged a clinic with a trainer in Whitesboro, Texas, just before I met Lizelle and I basically dragged her to America with me,” Greg said.

Lizelle was born an English rider, and essentially knew nothing about the sport of reining when she got a week-long crash course with Greg. The verdict? She fell in love with it.

“Once I did that clinic I was hooked. We started getting clinicians in our country and had shows. I haven’t looked back because I just don’t want to do anything but ride reiners,” Lizelle said.

For the last three years Greg and Lizelle have contemplated starting a NRHA Affiliate in their country. The task was daunting as they needed 25 NRHA members to get the paperwork started. Or so they thought.

“When some staff from NRHA came to visit us, we found out about a new rule that said we only need ten members since we are a developing country,” Greg said. This lit the fire and the couple ran with it.

“Within three months of inception, we’ve had three shows. It’s been amazing,” Greg said. “We are still small and we have limited number of members, but it is definitely something that everyone is excited about and we are looking forward to growing.”

While you’re at the 2020 NRHA Derby presented by Markel, make a short trip 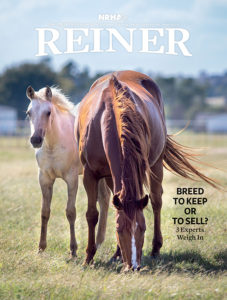