Behind the Slide – Brian Lookabill, Kentucky

You might not recognize his face, but you certainly know his voice. Brian Lookabill has been the voice of the 2020 NRHA Futurity. He’s kept the show going from his perch just below the flags on the south side of the Jim Norick Coliseum.

Holding a mic for almost 30 years, this Kentucky native got his start as an announcer in the world of show jumping.

“I got involved in horse shows when I was 16,” Brian said. “I grew up around horses but didn’t do much with them. Through a high school friend, I got involved with horse shows. Since then, I kept taking different opportunities until it turned into announcing and production, mainly.”

Although Brian has announced a wide range of equine disciplines, he’s recognized most for his work in show jumping and reining.

“I knew Colleen McQuay through the jumpers, and it must’ve been the late 90s when she asked me if I would be interested in announcing some reining events,” Brian said. “The first one I did was the Futurity, I think it was in 2000.”

The stark contrast between show jumping and reining isn’t lost on Brian, but from his perspective they can be quite similar.

“The root of it all is that they’re all still horses and people who are passionate about horses,” Brian said. “Of course there’s different nomenclature between the two and they’re looking for different things from the horses but the basic idea is the same: they love horses and they love the sport.”

The hootin’ and hollerin’ of reining isn’t commonplace in the show jumping.

“People do get excited in show jumping, but it’s a different type,” Brian said with a laugh. “In show jumping the crowd tends to stay reserved until the end of a round. And one of the main reasons is because you want to allow the horse and rider to maintain their focus while they’re overcoming obstacles.”

Brian has watched plenty of show jumpers become reiners and vice versa. But there are also plenty of equestrians who still do both events. Carlee McCutcheon is one example Brian brought up.

This year presented Brian, and other announcers, with a unique experience in their profession. A lack of crowds made their job at the mic a bit harder.

“It’s been a weird year as an announcer. I did some announcing up to the beginning of March and then didn’t have anything until the beginning of June,” Brian said. “When things came back, in the jumper world especially, crowds weren’t allowed anywhere. It’s strange to announce an event where you’re trying to make people stay away from it.”

Despite smaller, or nonexistent, crowds, Brian drums up excitement for the exhibitors through extra information and a natural-born talent for this line of work.

“When I first started it was frowned upon to talk about rankings of the riders,” Brian said. “They didn’t want to give anybody an idea of where someone stood when their score came out so that wouldn’t play a role in the score of the next run. We’ve come to a point where it’s okay to talk about rankings.”

Brian also looks to talk about the exhibitor’s life outside the show pen and he also provides interesting facts and figures about the horse and rider combinations. Learning what to talk about has been a natural progression for Brian the longer he’s been in this profession.

“I have to thank Colleen for bringing me into this [reining],” Brian said. “I wouldn’t be involved in this if it wasn’t for her. She’s still extremely supportive and I work with her often. And of course Tim has been very helpful and welcoming over the years, along with Tom and Mandy. And Cheryl’s been very good to work with over the years also.” 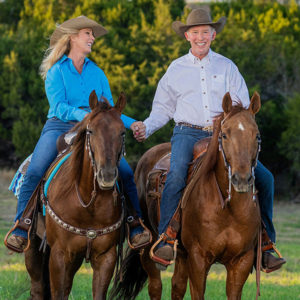 Behind The Slide – Classic Canyon Ranch

Signs of Hope and Togetherness

The April issue of your NRHA Reiner was produced just as the U.S. began