Hailing from a country in southeast Asia, Myanmar, Fred Win is the definition of a go-getter. Even from a young age he wasn’t afraid to chase his dreams.

“I have loved horses for as long as I can remember. I lived in the big city, so there weren’t any horses. I can remember when someone from the village came in with horses for pony rides. I ran out there like they were the ice cream truck.”

That’s how Fred fell in love with horses. After he finished high school, his dad bought him a horse to train. It proved to be a pivotal point in Fred’s life.

“He was three years old and I trained him for show jumping and trick riding. I became a professional in Bermu with a salary and everything.”

At just 23 years old, Fred decided to become a lawyer. He traveled to the United States and earned a bachelor’s degree and then fulfilled his goal of becoming a lawyer. In the process, he found a passion for reining.

“I always competed with able bodied people over there so when I came over here, I was shocked to see that there was para dressage, para reining, para jumping, very well developed. And that’s part of why I started doing it here.”

Fred was born without his right leg. It’s abundantly clear that’s never put a damper on his pursuit of excellence as an equestrian. Perhaps, it’s been a driving force behind Fred’s desire to be a horse trainer.

Although Fred does a majority of his own training, he is coached by Dean Brown. Fred likes watching Dean work horses and seeing the parallels between reining and dressage.

“Generally, the concepts between the two events are the same, but the positions are different. In reining you lean back, but in dressage you sit up straighter.”

The amount of contact on the horse’s bit is also significantly different. A draped rein simply doesn’t work in dressage, while in reining it’s a measure of accomplishment.

At the 2016 AQHA Congress, Fred won the non pro freestyle reining. He’s also the four-time defending para reining champion. After the 2019 Congress, Fred left with a truckload of accolades. 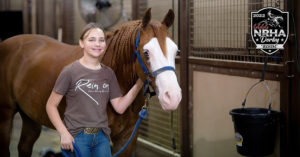 Banish Pests From the Barn

Use these proven tips from fly-control experts to keep your facility fly-free this summer.