If a global pandemic didn’t stop Oded Fein from making an appearance at the 2020 NRHA Derby presented by Markel, then the 24-hour plane ride was just a small hurdle. This NRHA Corporate Partner found his way from Israel to Oklahoma City by way of New York City and then Dallas.

“Like the rest of the world, we’ve been locked down in Israel for three months. Normally I travel back and forth—two weeks here, two weeks there.”

Like other places around the globe, Israel is slowly beginning to open back up. Even so, finding a plane ticket to Oklahoma was no small feat.

“I got special permission to fly because I have a special visa, but it still wasn’t easy. I flew for 24 hours and had to wear a mask.”

With a chuckle, Oded recounted that “it was a nice experience.” When he returns home, Oded will have to self-quarantine for two weeks before he can hug his wife and kids again.

Prior to traveling to another country, Oded quarantined with his family. He’s unsure of what he will be doing with so much alone time. Perfecting his barbequing skills is one of his options.

“Everybody is making an effort. It’s important that people see we are all moving forward and not just standing in place.”

The sacrifice is worth it for Oded as the reining industry is an extension of his family.

“In 2000, I came to the states and worked horses for about a year. Then I went back to Israel and I kept working horses and doing the diamond business.”

Reining in Israel isn’t big yet, but Oded said it is growing. Many people follow in Oded’s footsteps by learning new skills in another country and then brining that information back to their home country.

“Our reiners have a lot of passion for the sport. We are seeing more and more Israelis doing well in the reining. That’s a big honor for me and for everyone back home too.”

As a business owner, Oded has the unique opportunity to bring reining into a new light. Like many other elite professional sports, thanks to Oded, the Level 4 Open Futurity Champion rider and owner now receive a diamond ring from MS Diamonds TX.

“There is a lot more that goes into reining and horses than people know. It’s not just about being a cowboy and riding a horse; it’s about the way they train and take care of the horses to create a bigger picture. This is important, and I want people to be able to see that and to be part of it.”

PrevPreviousA Big Day at the Races & at the Reining
NextBehind the Slide – Tami Wilson, ColoradoNext

How to Make Lemonade

An orphaned Clydesdale colt and a reiner nurse mare make an unlikely pair, but 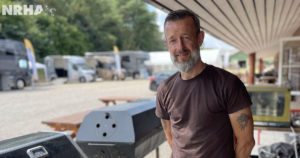 Behind the Slide – Ole Vorm

During the European Affiliate Championships, you can feel the buzz of excitement as they

The fear of not being good enough is real, but you can overcome it.