Behind the Slide – A Cool Back Story

Gabrielle “Gabby” Solum’s entry in the 2020 NRHA Futurity is A Cool Back Story, but the inspiration behind the name is in fact the coolest back story.

The 2017 reining prospect sired by SG Frozen Enterprize is out of Skeets Chexy Nic, a mare that Gabby, who is now a practicing veterinarian, has owned for the past 15 years. “I showed her for a brief time during high school,” she said. “When I interned at Silver Spurs Equine, she was one of the very first mares I bred.”

Gabby and her parents, David and Merida Solum, partnered up to breed the mare in hopes she would produce the futurity horse of their dreams. “Even though both my parents, Merida and David Solum, have worked in the equine industry for a long time, this was our first home-raised reining futurity prospect,” she shared.

Then, the day after he was born, the Solum’s dream foal began acting a bit colicky. Knowing the delicacy of any foal’s first few days of life, the Solum’s went straight to their vet, who first suspected an impaction. Upon further evaluation it was determined that the foal was actually born with a ruptured bladder. Surgery was advised to remedy the issue, however, that surgery was not successful. With a foal that remained gravely ill, the Solum’s were confronted with two options.

“One was to euthanize him,” Gabby said. “And the second was another surgery, one not normally done on foals.”

The Solum’s were discouraged, but not totally without hope.

“From the start, one thing that really caught our attention with him was that he had these really dark, captivating eyes,” Gabby said. “He was very involved with people, very interested in interacting with people. He honestly just had this will to live and was so strong despite all of the many challenges.”

Weighing their options, Gabby and her parents opted for another surgery, albeit an uncommon one. “We called him ‘Rocky,’ because we knew he needed a strong name. By the time he was five days old he’d already undergone two serious surgeries,” Gabby said.

All of this occurred while Gabby was in her first year of vet school no less. During the process of sedating him for one of the surgeries Rocky sustained a chemical burn, further complicating things.

“The burn caused muscle atrophy that he still has under that scar,” Gabby said. “The major part of the burn was on his back and down one hip. My parents and I treated the scar twice a day for six months. Within nine or 10 months we were able to see it heal, so the entire process with this horse has been an intense journey for us.”

By the time Rocky was a year old, the Solum’s realized his scar would always be there. They took the precaution of 5-panel testing Rocky to be sure the scar was not HERDA related, just to be safe.

“There’s a joke among veterinarians that every vet has one medical mystery and one fat dog at their house that no one knows about. Such is definitely the case with me,” Gabby said with a laugh.

The Solums registered Rocky as Rockzilliance, given his natural resilience and the barn name he was given early in life, but that was soon to change.

“Tish and Andrea Fappani, who’ve been family friends for many years, were interested in this horse’s story,” Gabby said. “They very kindly offered him a place in their program, which has been incredible for us.”

Considering his medical history, Rocky has been ridden with a sheepskin saddle pad. The Fappani’s also make sure that salve is applied twice daily to his back. “Amazingly, the scar has been no trouble, which has really been a blessing,” Gabby said.

However, by the end of his 2-year-old year, Rocky had hit a wall in his training. Exhibiting a bit of immaturity and lack of focus, the Solum’s determined that gelding Rocky would be in the best interest of his show career. The other pivotal decision they made was to officially change his name.

“The second we made that name change to A Cool Back Story, which became official in March of this year, he just took off and kept progressing. It was like the light switch went on,” Gabby said.

A Cool Back Story has overcome medical complications literally since day one. He is indeed a medical anomaly.

“Another thing that cropped up is that he has ulcers in his bladder, which is extremely rare in horses,” Gabby said. “But we’ve done everything we need to do to manage that situation carefully and he’s staying really healthy. Beyond that he’s just such a kind horse and is such a cool individual to have around. Something kept us believing in him, so for him to be the first homegrown Futurity entry for our family is very rewarding. It’s been such an exciting journey.”

A Cool Back Story earned the Best Of The West Open Level 1 Futurity Championship in Scottsdale, Arizona, in June, which is the only other time he has been shown aside from here in Oklahoma City. Gabby expressed her gratitude not only to the Fappani’s but also to Leo Kellerman, who shows A Cool Back Story, for demonstrating what they believed he was capable of achieving from the start. 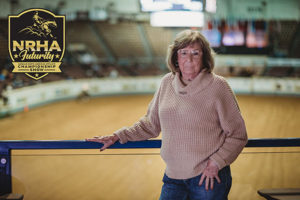 Behind the Slide – Linda Kiser

Speak the name Kiser around a reining pen, and the first thing that comes

Emily Emerson and Give Me Starbucks won the 2019 NRHA Invitational Freestyle Reining. Article